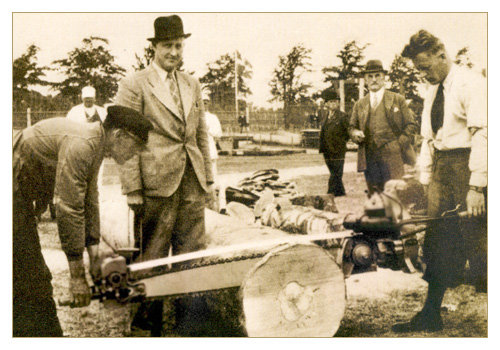 Home Resources Andreas Stihl & The Invention Of The Chainsaw

Andreas Stihl & The Invention Of The Chainsaw

Stihl are the largest chainsaw manufacturer in the world, and it was their forbear, Andreas Stihl that first invented the electric chainsaw in 1926. In this article, we take a look at the history of these tree felling machines and how they became the tools they are today.

The “Cutoff Chainsaw for Electric Power”

In 1926, Andreas Stihl was running a small engineering company manufacturing boilers in Stuttgart. Separately from the boiler business, he had developed an electric powered tool for felling trees, for which he filed for a patent.

This was the first commercially available chainsaw, but it was a long way from the handheld machines we use today. It weighed 64kgs, and was so large it required two people to operate. At that stage, it was far from a roaring success, and with high unemployment from the Great Depression, many found it easier to use large handsaws instead.

Nevertheless, Stihl achieved a modest degree of success with his electric chainsaw, and in 1929 produced the first gas powered version. He called this machine the “tree-felling machine”, and continued development over the next few years. By 1930, he had improved the design and created the first handheld chainsaw – a small electric machine for bucking.

It was not until the 1950s though that chainsaws started to resemble the modern machine. The Stihl BL was the first single operator petrol chainsaw, and weighed it at a sprightly 16kgs. You would have needed to be very strong to operate a machine like that!

Business continued to go well into the mid 1950s, and Stihl produced the first truly mainstream chainsaw – the BLK. This closely resembled the modern chainsaw, and in 1954, was well ahead of its time.

By this point, the company had developed a huge amount, and was now producing all sorts of different garden equipment. Bolstered by the success of the BLK, Stihl continued to innovate and produce metal cutting saws and many other clever devices.

By 1960, it was time for Andreas’ oldest son, Hans, to take up his first role as assistant to the management. This marked the beginning of the family era for Stihl, which continues to this day. The business remains family owned – despite having 17,000 international employees and factories all over the world. Indeed, Hans continued to serve on the board until 2002.

It was towards the end of the 1960s – in 1968 – that the millionth chainsaw rolled off the production line. Chainsaws had become popular in everything from forestry to yard work – and Stihl was growing at a rapid pace.

That growth continued for the next 40 years, and Stihl continues to be a market leader in lawn and garden equipment. It’s truly a fascinating story about how a small family business can grow into a global empire across multiple generations.