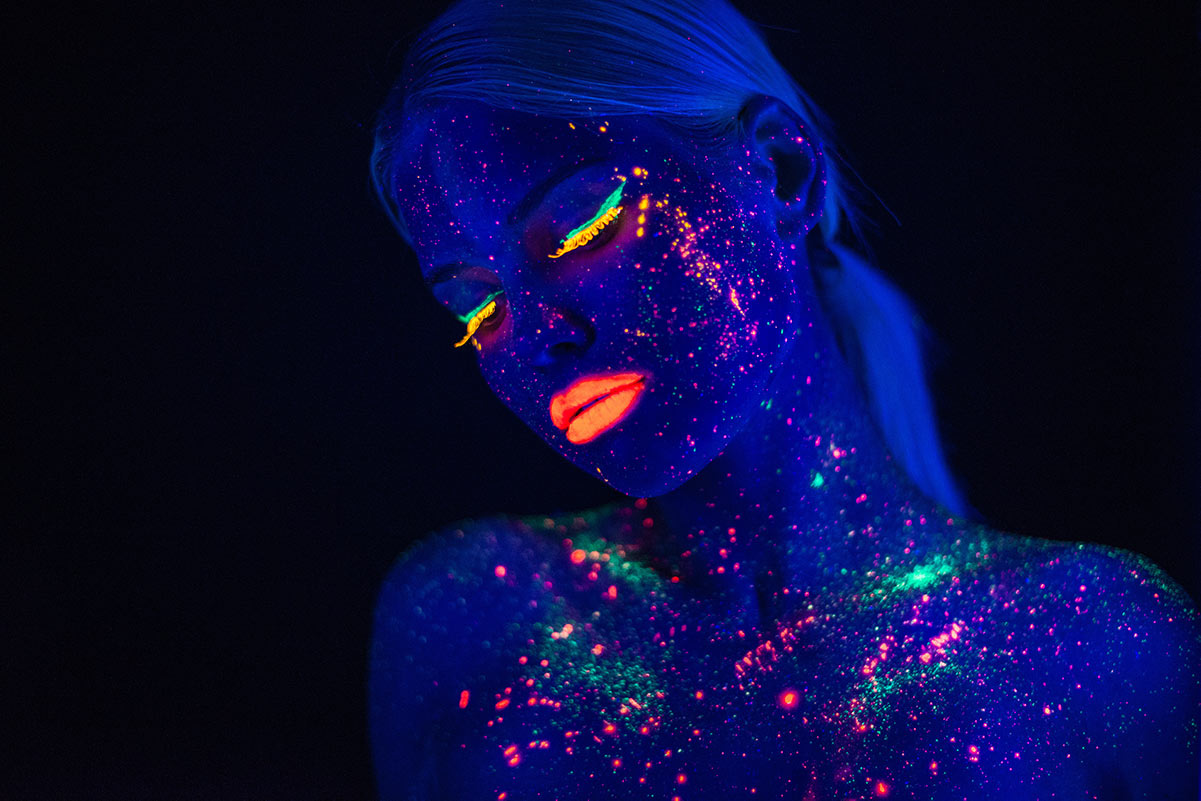 Home Resources How Does Glow In The Dark Paint Work?

How Does Glow In The Dark Paint Work?

Whether you are a kid or an adult, it’s hard to not be impressed at the amazing effects created by glow in the dark paint. But just how does glow in the dark paint work? In this article we’ll take a look at science behind these clever materials, and how they produce such an amazing phenomenon.

First – A Brief Introduction To Light

You probably know sound travels in waves, but you might not know that light also travels in waves. And just like sound, there is a broad range of lengths of light waves. As it turns out, only a small part of those wavelengths is visible to humans – a part which you’ve probably heard of called “the visible spectrum”.

Different Types of Glow In The Dark Paint

Blacklight paint – or fluorescent paint – exhibits some interesting characteristics which make it unlike any other material. Most materials reflect or absorb whatever light or sound waves hit them without altering the waves. The only exception to this is the prism or the rainbow.

Fluorescent paint absorbs invisible UV light, but then emits it again as visible light at a shorter wavelength. So, the paint is not itself emitting light, rather reflecting light back at you in a visible wavelength.

You have probably seen blacklights in crime television shows. These lights emit UV “black” light, which is invisible to the naked eye. But when it falls onto a fluorescent paint, it reflects brightly in the visible spectrum. This is why fluorescent paints work well in concerts and dark rooms. No other light is visible, unless it is reflected from the UV blacklight.

The History Of Phosphorescence

Phosphorescence was first discovered in 1604, by the Italian chemist Vincenzo Cascariolo. He discovered a stone which, after heating in an oxygen furnace, appeared to absorb and re-emit light.

At the time, this discovery perplexed many scientists who could not offer any explanation. The so called “philosophers stone” was thought to be linked to the art of alchemy. It was commonly believed that placing it near materials would turn them into gold.

Today, we know the material he discovered was a mineral called Baryte. The process which he discovered is called calcination, and is used widely in the chemical industry today. While not all calcinated Baryte glows, certain forms of the mineral do exhibit these properties.

These days, glow in the dark paints are made using either zinc sulphide or strontium aluminate. These two chemicals exhibit the same properties as the philosopher’s stone, but are much easier to produce in large quantities.

Phosphorescent materials are used extensively in children’s toys, concerts and art. Combined with other materials, a variety of interesting effects can be created which continue to wow people to this day.