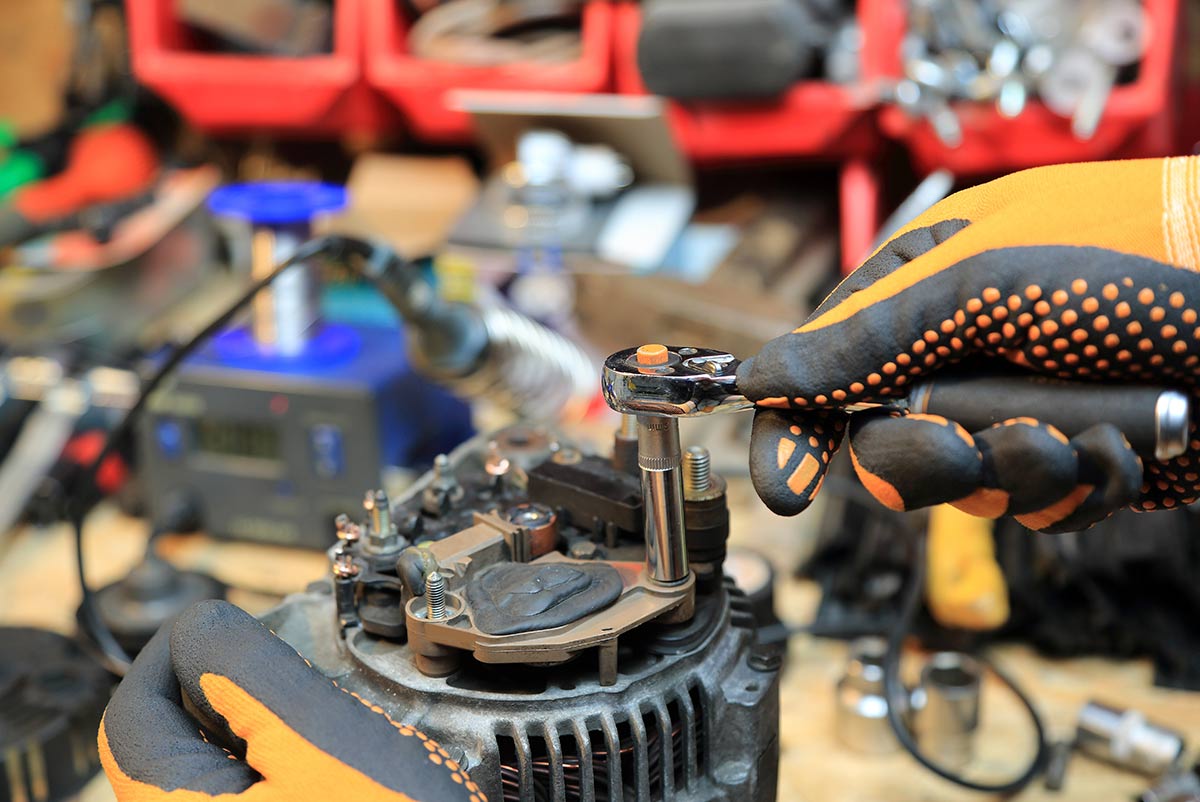 How Do Portable Generators Work?

A hundred years ago, the idea carrying a portable generator around with you seemed unthinkable. How could such a small device produce enough electricity to power appliances? In this article, we’ll take a look at how portable generators work and dive into their history.

Alternators work by moving a coil of copper wire backwards and forwards though a magnetic field. Electrons in the wire are move under the force of the magnet, generating a small electric current.

Because the coil is rotating through the magnetic field, the flow of electrons in the wire actually alternates in backwards and forwards. When the coil spins faster, the current changes direction faster too. As you might expect, adding more coils adds more electrons to the system and creates more electricity.

Keeping all of these factors in balance is the key to controlling the power output of a generator. A governor keeps the motor running at a constant speed. This is pre-set to ensure your voltage oscillates at the correct frequency for your power output. AC voltage in the US typically oscillates at 60hz.

Adding more coils to the generator increases the power, but it also increases the weight of the machine. Heavier coils require a larger gas motor to turn them. Because there are more electrons to move (in more coils), you also need larger magnets, too. Large generators have huge coils and huge magnets to match!

How does your alternator produce the correct voltage? Well, that is the task of a component called a voltage regulator. Voltage regulators use a series of coils and magnets to regulate the output voltage of the system.

Your portable generator will also include a number of additional systems for safety and ease of use. These could include cooling, starting systems, oil systems, and electrical circuit breakers.

All engines need cooling and a starting system. Most generators are air-cooled, which means they use the air around them to prevent the engine from overheating. This is why you will often find a fan included in an generator housing. Where air is not available, some generators use a radiator system like a car. However, this approach is very uncommon and typically only found on commercial machines.

To make the electrical output safe to use, all generators will use circuit breakers. These detect spikes in current caused by short circuits, and immediately break the current. Circuit breakers can be lifesaving devices, as they reduce electrocution to short shocks rather than ongoing exposure.

How does an inverter generator work?

An inverter generator is a more modern type of generator which produces higher quality electricity. Old generators are prone to producing voltage spikes and surges, which can damage sensitive electric equipment like laptops and cell phones.

Inverter generators solve this issue by inverting the current from AC back to DC and then back to AC before sending it to the outlet. This helps to smooth out the flow of current and make it safe to use with electronics.

Inverter generators are very popular in the 2000W category, which work well in RVs, and in camping and tailgating situations. They aren’t as important for power tool usage, but will still enable you to use power tools with them.

When was the generator invented?

The first incarnation of the generator came in the form of the Faraday Disk Generator, invented by Michael Faraday in 1831-32. This device rotated a disc through a horseshoe magnet, generating a small AC current across two terminals. Although inefficient, this device was a milestone in the creation of electrical devices.

The major problem, however, was that most electrical devices in that period required DC or direct current. And it was not until the invention of the dynamo, sometime later, that inventors were able to produce DC current on demand.

A dynamo works much like a alternator does today, but used an innovation called a commutator – which converted the alternating current into pulsing DC current. This was achieved by attaching a set of rotating contacts to the rotating coil, so it only generated current in one direction.

Development of dynamos and alternators continued throughout the 19th century and afterward. Key innovations include the reducing of friction in the systems with better bearings, and the invention of rectifiers and other solutions to manipulate the current output. Generators are now an integral part of society, producing electrical power in everything from power stations to car engines. It’s hard to underestimate the size of the impact these clever devices have had on our society.